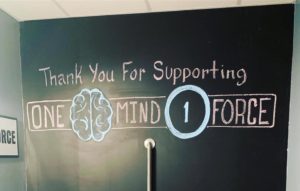 “You are very lucky in your great misfortune.”
Monday was our first follow up with Jesse’s neurosurgeon after discharge. The doctor went through all of Jesse’s brain scans with us—from the first in the ER on March 24 to the one he got just days before the appointment—to better explain what happened and how his recovery has progressed.

The misfortune Dr. Petrov spoke of was obviously the three blood clots that flowed to his Jesse’s brain during his routine oral surgery. The “lucky” part was where those clots decided to lodge. One was in the right frontal lobe, where your personality is located. We’re good there—Jesse is still mild-mannered, hilarious, driven and positive. The other two settled in the cerebellum, where motor and balance control is housed. In the grand scheme of what happened, this was the main (and massive) event. Had he suffered an injury of this size in any other center of the brain, our outcome would have been much different.

“I saw where the scar was, and I knew what that meant.”
The update video made by the amazing Sheri Walsh was the first picture or post Jesse has made since his strokes. I personally struggled with making it because we were so emotional. But Jesse insisted. He wanted to thank everyone for their support while also showing the world that he is still him—a little changed but improving every hour. He also wanted to talk about stroke signs and how to detect one FAST.

For my “medical staff” at 1Force, (the nurses and doctors who have been giving me text advice since this nightmare began) the video was especially hard to watch. Major props to Sheri for keeping her composure while making it.

One teeny beast nurse who has been with us for years shares a quiet connection with Jesse that only great coaches and intensely committed athletes can understand. Christen Conway can’t recall the moment she saw the scar on the video without tears springing to her eyes. She knew it was so close to his brain stem—and she recently told me she knew what that meant. Of course she was 100% right.

Dr. Petrov showed us in Jesse’s original scan his angry swelling brain and the areas of danger it presented. The reason for the emergent craniotomy was to stop Jesse’s brain from herniating into his brain stem—a potentially deadly side effect of very high pressure within the skull that occurs when the brain swells.

The craniotomy stopped that from happening, and saved Jesse’s life, so he can continue to help save others, both as a CrossFit Coach and New Jersey State Trooper. I try not to spend any time on why it didn’t herniate, or how much time he had left, because thank God that didn’t happen. But the unspoken terror I saw in Christen’s tear-filled eyes when we talked about the scar summed up exactly how my heart feels when I recall that night.

“You look so much better than your chart.”
This comment has been delivered to Jesse countless times to Jesse in the past 7 weeks. Replace the word chart with scan, story or report, but it still means the same thing, and medical professionals can’t stop saying it. What happened in Jesse’s brain does not match his current physical capabilities. He is blowing everyone away with his recovery—except for those of us who know and love him. We’d expect nothing less.

The most recent scan that Dr. Petrov reviewed on Monday showed a collection of fluid in Jesse’s cerebellum that will need to be dealt with surgically if it causes increased head pain, nausea, loss of balance or strength. They were surprised that it was not giving him discomfort and are committed keeping his head closed unless it’s absolutely necessary. This wife likes the sound of that, and so does my husband.

“He looks out for everyone. At lunch, in group and in the hallway. We can tell he’s a coach.”
After a killer paleo breakfast, I drop Jesse off at Magee each morning for his outpatient rehab program that goes from 9am-3pm. Every day is jam-packed with physical, occupational, speech, group and recreational therapy. He comes home dead dog tired and still walks our dog. He never asks for a break or a day off and takes comfort in knowing that his battle will be won with dedication. Much like our sport of CrossFit, Jesse can only reach his full potential with consistent work, balanced programming and measureable goals.

Jesse adores the Magee staff and is especially fond of Joann, the nurse in charge of his overall care. I stopped in to see her this morning, huffing about my frustration over some paperwork that I was trying to track down and get to her. She assured me all was ok, and told me what a great patient Jesse was and how he helps everyone else.

In that moment I was mortified. I had not thanked her for all that she was doing for Jesse. In my rush to get the ever-growing to-do list done, I forgot to lead with something other than frustration.

“He’s very happy here Joann. Jesse said Magee is the best because each person that works here truly cares. Thank you for caring.”
Jesse and I lay in bed and talk about how we can thank the world for the overwhelming support we’ve received. There’s just no way it’s possible. Our multiple families have rallied to take care of us, our children and our dog—knowing what we need before we even need it. Countless strangers have heard our story and offered prayers. Hundreds of cards, calls and texts come in unanswered, but cherished nonetheless. I started my thank you cards last night, I’m five in and I have five hundred to go. (Rest assured, they are coming. I love writing every word.)

And perhaps most moving of all—hundreds of athletes moved through thousands of reps last weekend at the OneMind 1Force workout, paying respect to my amazing husband and learning more about the early warning signs of a stroke. Please read this and share, and together we will save lives with awareness and action. Alone we are just one—but together we are an army.

“When you love someone, you want to do everything beautifully.”
A life lesson from Rose Stauffer, owner of Michael Anthony Studio Salon in West Deptford. She told me this years ago, and until this recent crisis, I didn’t fully understand what she meant.

The hundreds of donations that have come in from all over the country allowed me to take a leave from my job and my gym and stay with Jesse and continue to help him navigate the complex medical world of rehabilitation, referrals and deductibles. I can only make his breakfast, participate in therapy, be a guest reader at Cruzy’s school and love my family extra hard because of your generosity.

YOU are the heroes in this equation—giving our family the resources we need to stay whole while we help Jesse become whole.

It’s a vacation of sorts. Not one that anyone in their wildest dreams would plan or opt in for—but a journey so painfully beautiful that it can only be explained in tearly-eyed quotes of gratitude, admiration and triumph. We have a second chance to prioritize life, love, health and happiness while basking in the glory of the simple fact that he is still #here. For that, we are eternally grateful.

It’s simply not enough to tell you thank you—but we can show you. Stay tuned.